To Its Beginning To Its End (Revolution) 2012
The Armitt Museum and Library, Ambleside.
Contribution by Russell Mills for the exhibition Sublime Transactions: Artists Respond to the Armitt’s Collection 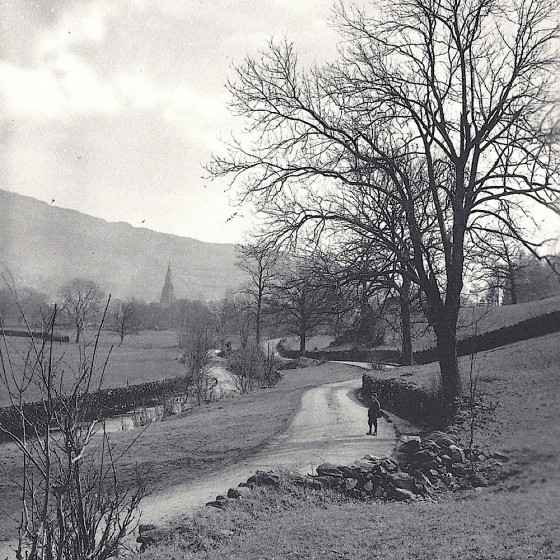 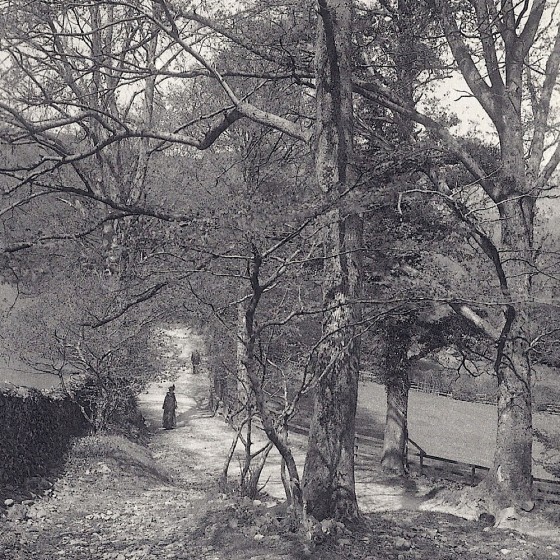 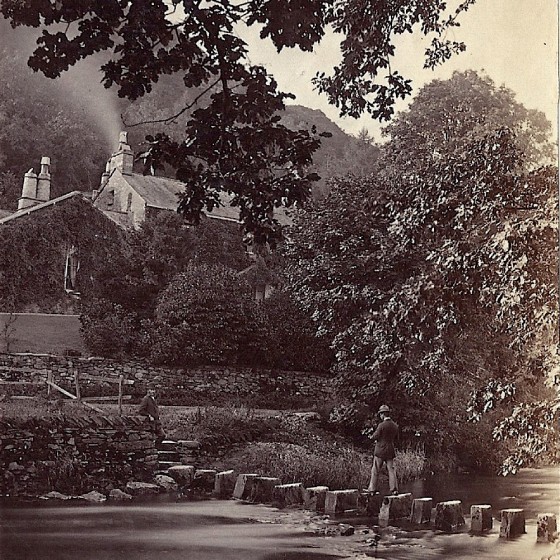 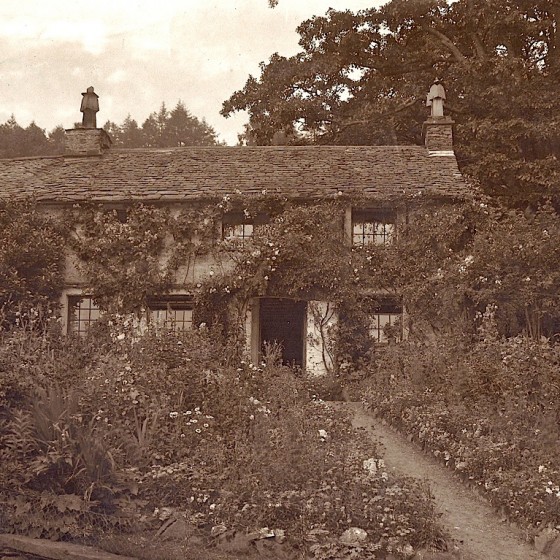 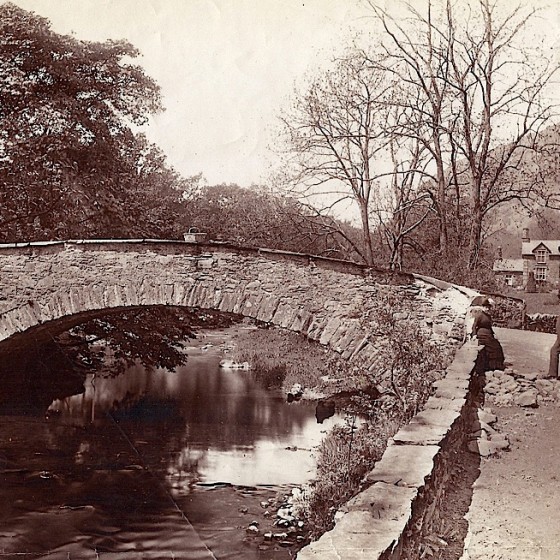 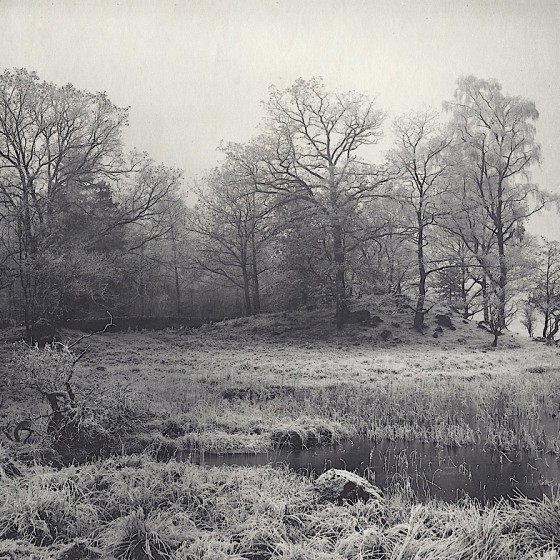 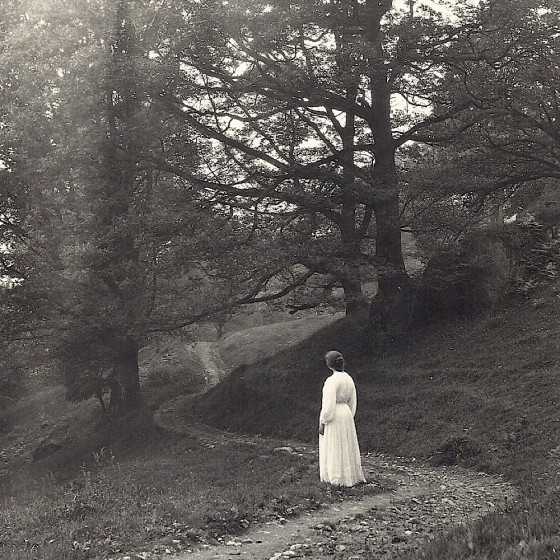 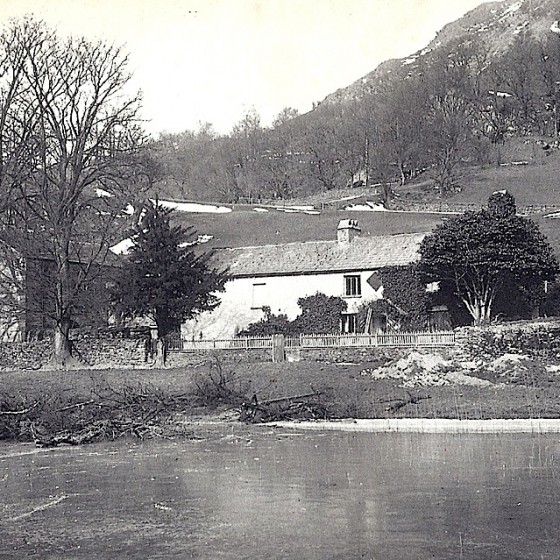 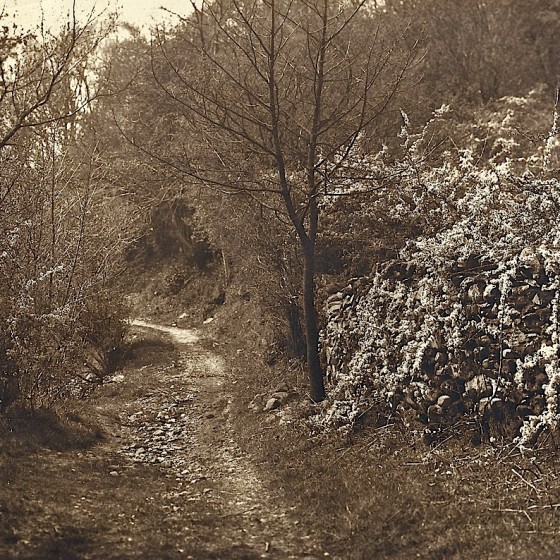 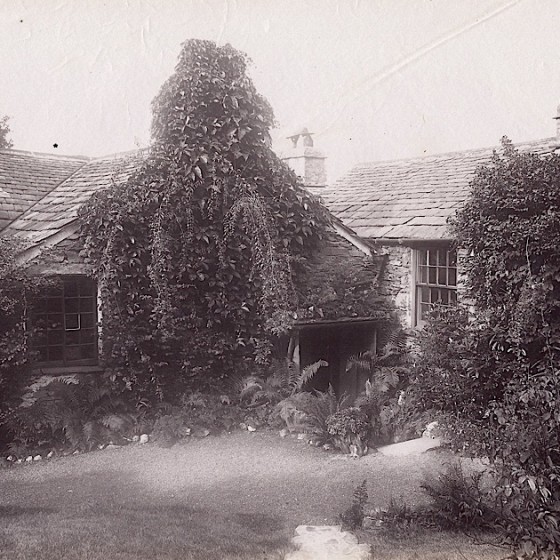 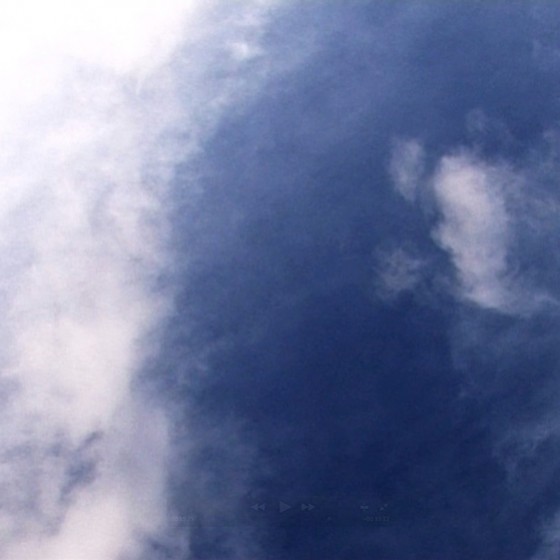 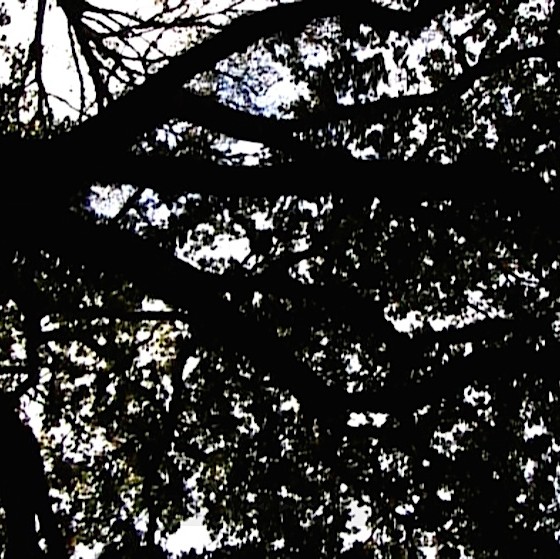 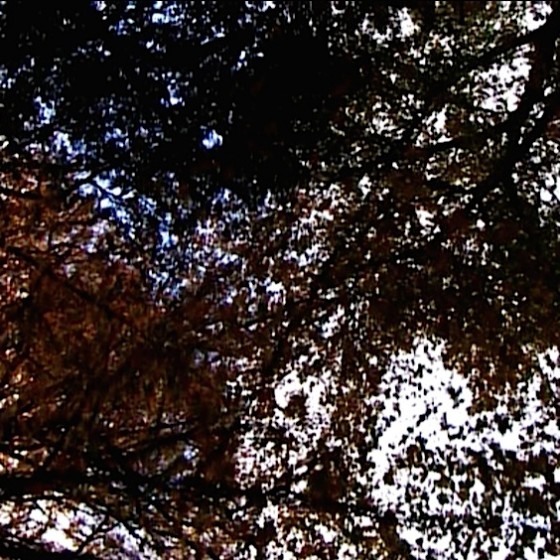 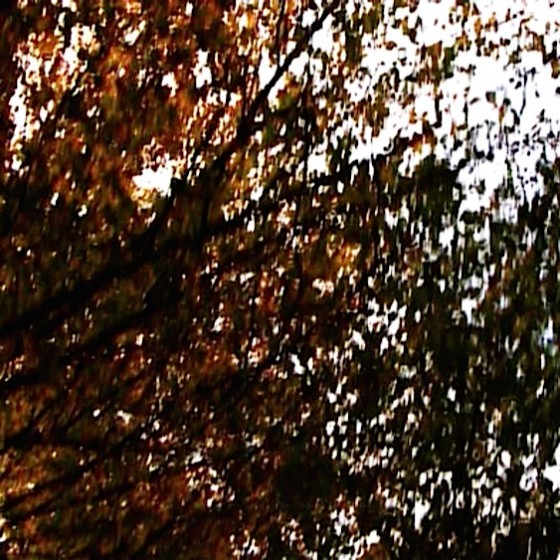 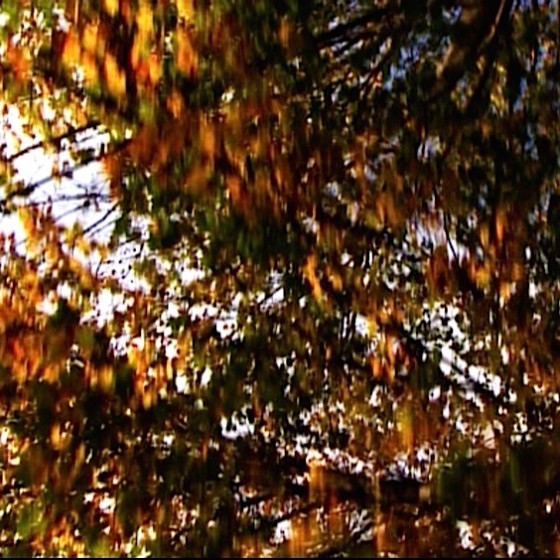 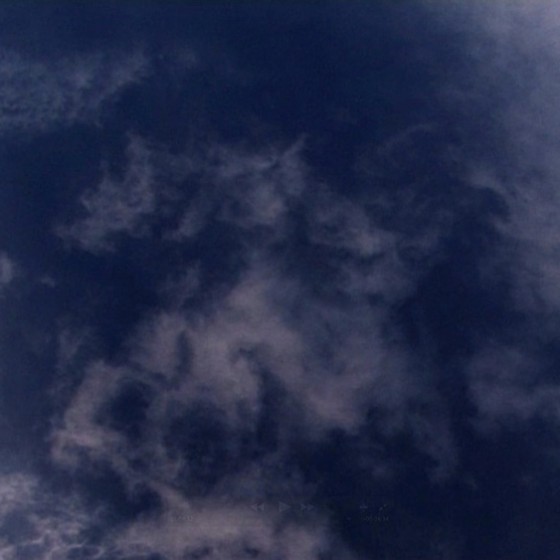 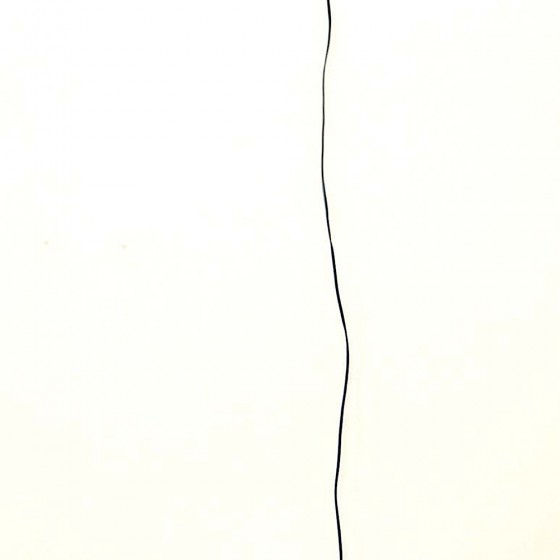 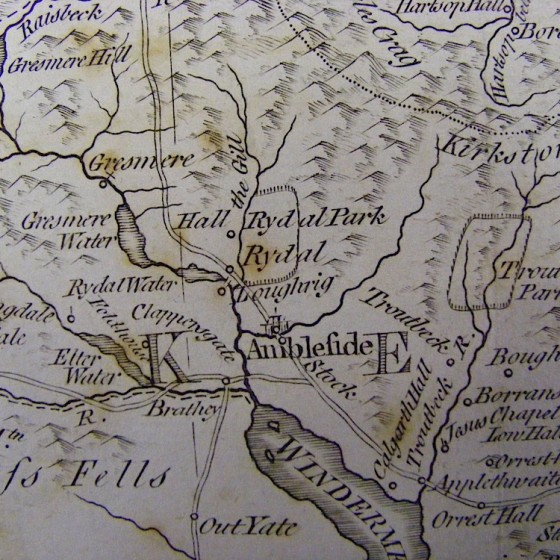 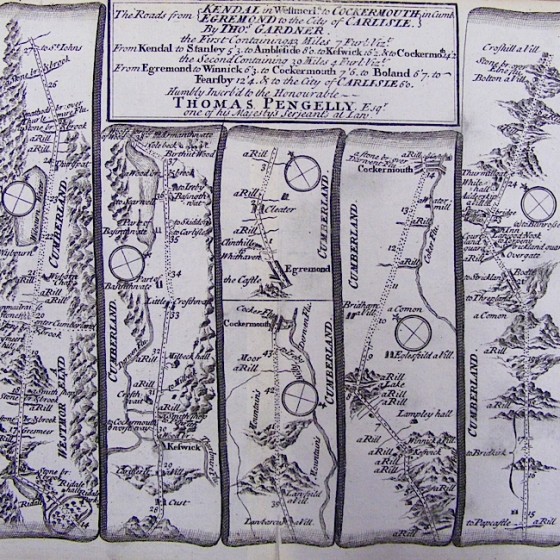 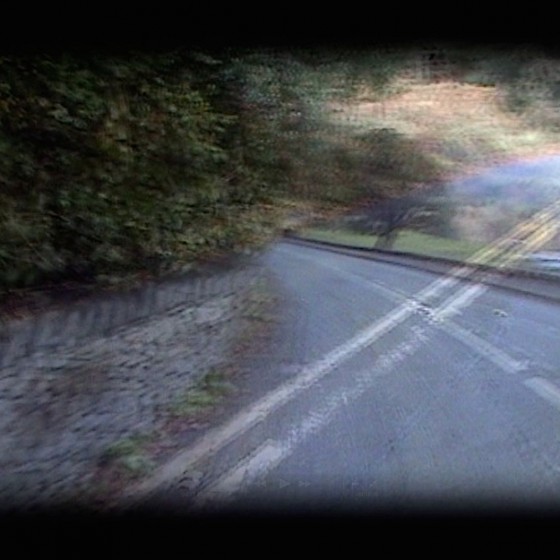 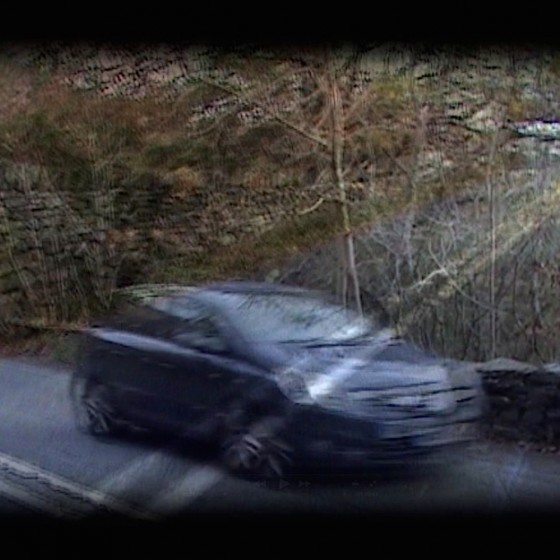 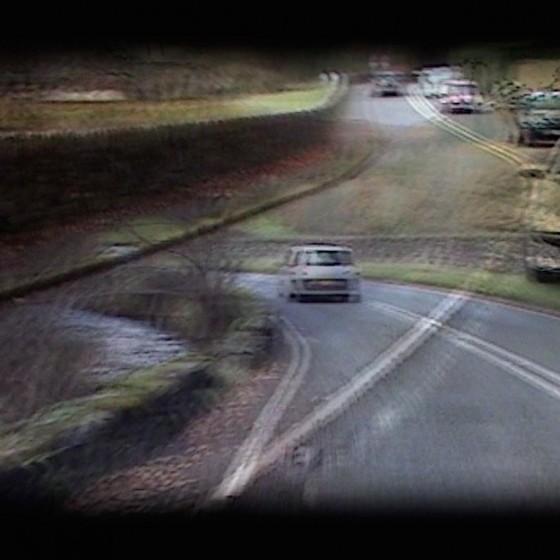 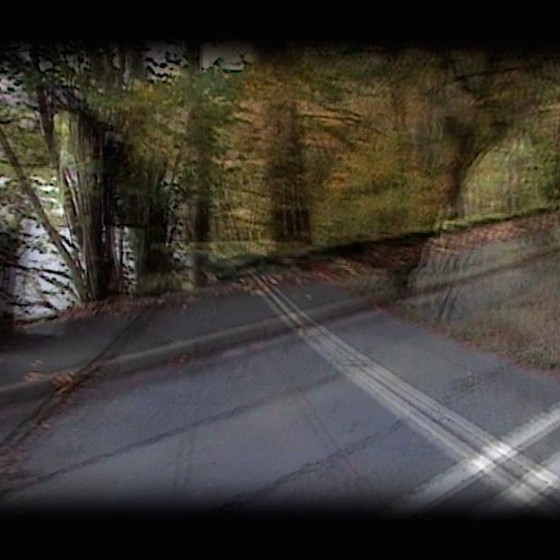 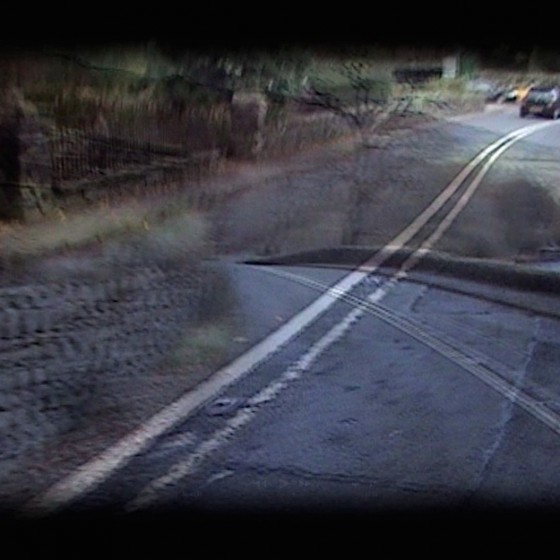 Two single channel DVD films (2 hrs 17 mins 26 secs) on continuous loop, text and photographs from the Armitt Collection .
Films by Russell Mills, assisted by Paul Mann; edited by Russell Mills and Michael Webster
Memory and process in a ceaseless cycle: the sweep of thought into sensation and back again.  Self into nature and back again.
Forward yet accepting having come from before.

To Its Beginning To Its End (Revolution): Soundscape 2012
Multi CD generative sound work for six CD players and 12 speakers.
Composed to complement the films To Its Beginning To Its End (Revolution) and Ghost Skies,  the sound work is a paean to the numinous essence of the undulating vales of Ambleside (Loughrigg),  Rydal and Grasmere, and a tribute to the revolutionary minds and ideas of all those who have lived and walked its inspirational circuit.
An asynchronous immersive sound system employing six CDs, each carrying a unique menu of sounds and silences, each programmed to play randomly, creates a continually shifting, self-generating mix in real time, with no one permutation of sounds ever repeating.  Sonic materials used include; the human (breathing, walking); the natural (the River Rothay, winds on Loughrigg, indigenous bird and animal life, struck stone and wood), the man made (electro-acoustic “musical” elements) and the hybrid (Aeolian harps). All sounds have been subjected to transformative recording effects to create a magnified, ever-changing, otherworldly sonic sense of place, time and emotion.

Primum Mobile: This That There 1999-2012
Adapted radio, Kurt Schwitters’ scissors, copper, earth, oils, acrylics and varnish.  Dimensions variable.
Conceived in homage to the ultimate protean artist Kurt Schwitters, to his work, his life and his suffusing influence: an adapted 1940s valve radio ceaselessly searches in vain for a stable signal in an uncertain world.  A generative sound collage machine, the radio’s chance encounters with disparate sources reveals an ephemeral drift of audio collage in real time.
Revolve: from late Middle English (in the senses ‘turn (the eyes) back’, ‘restore’, ‘consider’): from Latin revolvere,  from re- ‘back’ (also expressing intensive force) + volvere ‘roll’.
Advancing slowly, a camera ceaselessly revolves through 360° degrees, spiraling extended ellipses, scanning a serpentine circuit between Grasmere, Rydal and Ambleside, the genius loci of the Lakes Poets and their advocates. Its short course describes an anamorphic curving S, shaped by the sinuous River Rothay, which rises in the north from the south-facing slopes of Dunmail Raise to be swelled by Easedale Beck at Grasmere and Stockghyll in Ambleside. To the north the river emerges from the narrow gorge below Loughrigg Terrace, revealing Grasmere sculpted in a bowl, open to the sky; to the south it again widens into Rydal Water on its journey towards Ambleside to its eventual outflow into the head of Windermere.

An infinity symbol aslant: the Romantic’s favoured circuit from Dove Cottage in Grasmere, follows a woodland track over White Moss to join the A591, the main artery through the heart of the Lake District between Kendal and Keswick, and on to Rydal and Ambleside. Dr. Arnold dubbed the three roads between Grasmere and Rydal thus: the highest, “Old Corruption”: the intermediate, “Bit-by-Bit Reform”; the lowest and most level, “Radical Reform”. Returning from Ambleside the route meanders along beautiful Under Loughrigg, hugging the Rothay until it rejoins the A591 at Pelter Bridge, from where it returns to Grasmere.

Tracery in air; the camera sweeps…

Along these ancient tracks and roads that make up a short circuit of about seven miles, a disproportionate number of our most influential cultural shape-shifters have lived, visited or walked. Pulled to the revolutionary ideas of the Romantics, with Wordsworth, Coleridge and Southey its nucleus, a vortex of writers, artists, poets, scientists, engineers and social theorists, converged to map dazzling new mindscapes. Sense-seismographs, with land in their DNA, they looked beyond the known to reveal invisible irredeemably “other” energies and alternative histories of people and places as a means of re-wiring into the world. Their innovative and prescient experiments with the word: the abandonment of conventional genre and narrative structure; preference for vernacular subject matter and unadorned vocabulary; an advocacy of subjective, fleeting experience and partial indeterminacy, intertwined with radical explorations of the intrinsic value of the natural environment, have girdled the globe, defining much of our understanding of, and approaches to, literature, art, ecology, human rights, politics, social economics and the wider implications of cultural evolution.

With panoptical gaze, the camera, seeks out past and future ghosts…

The twin sages of experimental modernism, Bacon and Descartes, fired the Lakes Poets’ crucible of creativity in their proposal that knowledge be induced rather than merely represented, where knowledge: “…is delivered as a thread to be spun on…delivered and intimated in the same method wherein it was invented.”  In the Preface to the second edition of the Lyrical Ballads (1800), in what may be considered as a manifesto
for the multifarious modernist movements that have followed, Wordsworth echoes Bacon’s axiom, insisting that, “all good poetry is the spontaneous overflow of powerful feelings, it takes its origin from emotion recollected in
tranquility: the emotion is contemplated till, by a species of reaction, the tranquility gradually disappears, and an emotion, kindred to that which was before the subject of contemplation, is gradually produced, and does itself actually exist in the mind.”

Succession of Presents
The twin sages of experimental modernism, Bacon and Descartes, fired the Lakes Poets’ crucible of creativity in their proposal that knowledge be induced rather than merely represented, where knowledge: “…is delivered as a thread to be spun on…delivered and intimated in the same method wherein it was invented.” In the Preface to the second edition of the Lyrical Ballads (1800), in what may be considered as a manifesto for the multifarious modernist movements that have followed, Wordsworth echoes Bacon’s axiom, insisting that, “all good poetry is the spontaneous overflow of powerful feelings, it takes its origin from emotion recollected in tranquility: the emotion is contemplated till, by a species of reaction, the tranquility gradually disappears, and an emotion, kindred to that which was before the subject of contemplation, is gradually produced, and does itself actually exist in the mind.”
In the latter half of the nineteenth century Charles Baudelaire declared: “modernity is the transient, the fleeting, the contingent.” And Ruskin, writing in Modern Painters, advised artists to reject nothing. The Romantic Movement’s most significant and far-reaching bequest to the arts has been our understanding of life as “consciousness” and reality as being both fragmented and yet unified: its self-reflexive aesthetics, drawing energy from the collision of disparate conceptual and perceptual elements leading to revitalisation, made it the benign midwife of collage, probably the most important idea of the 20th century.
The genealogy of the 20th and 21st century’s avant-garde is a chronicle of collage and its host of supplementary concepts: juxtaposition, fragmentation, discontinuity, appropriation, intertextualality, plunder, metaphor and metonymy, excavation, aphorism, quotation, tessellation, the aside, repetition, splicing, interruption or caesura, dub, the inner voice, the mash-up and the gaze, A mutable matrix, collage and its elastic possibilities have become synonymous with all subsequent waves of modern experimental artistic and literary movements, mavericks and -isms: Nouveau Realism, Futurism, Cubism, Constructivism, Dadaism, Surrealism, Imagism, Fluxus, Happenings, Arte Povera, Conceptual Art, the Situationists, Pop Art, Land Art, Punk, Installation… the journey continues.
The spark arcing between these fellow travellers and the present is the mercurial synergist Kurt Schwitters (1887-1948), who is rightly acknowledged as the master of collage. Schwitters, utilising society’s discarded detritus, echoed the Romantics, defining the creative process not as a separate sphere, but as intimately linked with everyday life as a process of organic transformation. Reflecting in 1930 on the formless chaos of society’s collapse following the ruptures of the First World War, Schwitters wrote: “Everything had broken down and new things had to be made out of the fragments. Collage was like an image of the revolution within me – not as it was, but as it might have been.” Polymath, lyrical, radical: his explosive assemblages, experiments in primal phonetics, innovative typography, protean immersive Merzbau sculptures, and his as yet unrealised dream of the Gesamtkunstwerk: the total synaesthetic work of art, defied all categories.
His irrefutable influence, through the paradigm of the collage as concept and as construct, has suffused every area of our cultural and media landscape since the 1920s.
Schwitters, pioneer of the European avant-garde during the 1920s and ‘30s, spent the last years of his life in near poverty and obscurity in Ambleside. In 1947 during his last year, he produced an exquisitely delicate and minute collage, titled For Kate, which incorporated tiny fragments from an American comic. This minute collage was dedicated to his old friend, champion and benefactor Kate Steinitz, who, having fled Nazism for America, continued to send “care parcels” to Schwitters wrapped in papers she thought might be of use to him. Due to the wartime restrictions, colour printing in England at the time was extremely rare and comics were unknown. Schwitters, ‘”the lonely man who was ahead of his time” must’ve been overwhelmed with this jewel-like scintilla. For Kate is now considered by many art experts to be the work that ignited Pop Art, a movement that, over ten years later in the grey transitional years of the late 1950s, reveling in the joyful appropriation of the banal, the kitsch, the everyday, brought colour into the 1960s.
One of the most influential works of the 20th century, the seed for many of today’s multimedia and installation artists, is Schwitters’ remarkable, hugely ambitious work, the Merzbau. A sprawling proto-cubist, immersive sculpture that Schwiitters began constructing in 1927. Interpenetrating eight rooms of his Hanover house, it was left unfinished in 1937 when Schwitters was forced to escape to Norway with his son Ernst to escape Nazi persecution. The eminent art critic Robert Hughes in The Shock of The New, describes it as: “supremely Joycean… a nautilus containing memory jammed next to memory in its chambered, outward-growing grottoes…”
On October 8th 1943, my Father, then a 23-year-old rear gunner flying Lancaster Bombers, was over Hanover as part of an Allied bombing raid involving 504 aircraft. Schwitters’ Merzbau and all of his works that he’d been obliged to leave were completely destroyed. Bomber Command records state, almost as an aside, that it was: “probably Hanover’s worst attack of the war.”