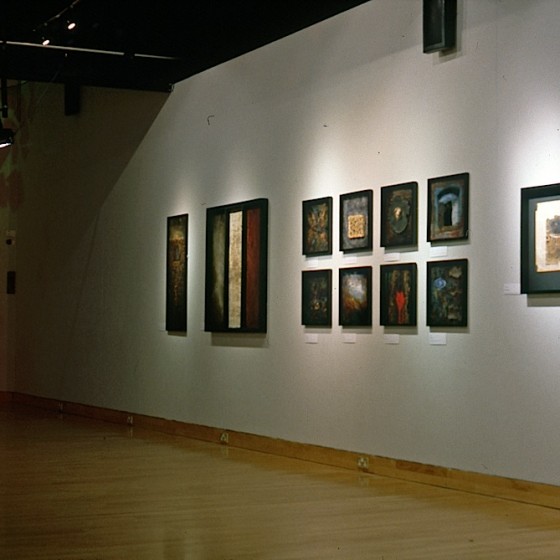 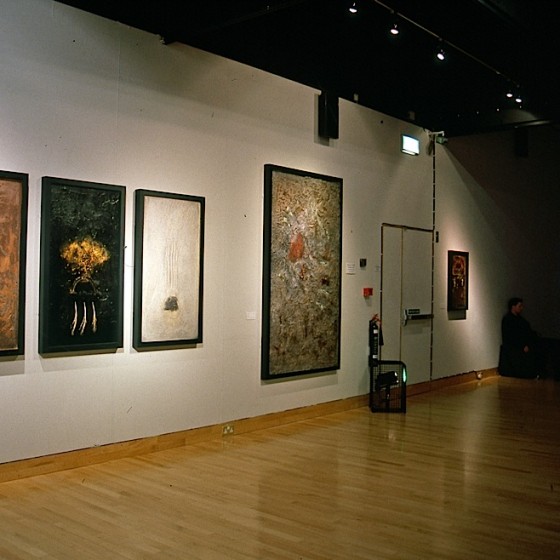 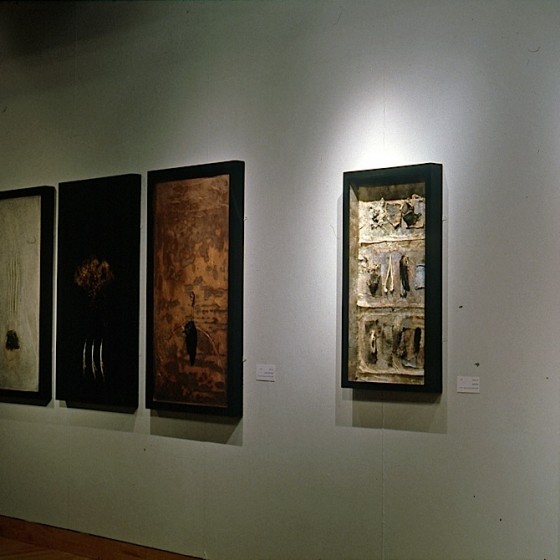 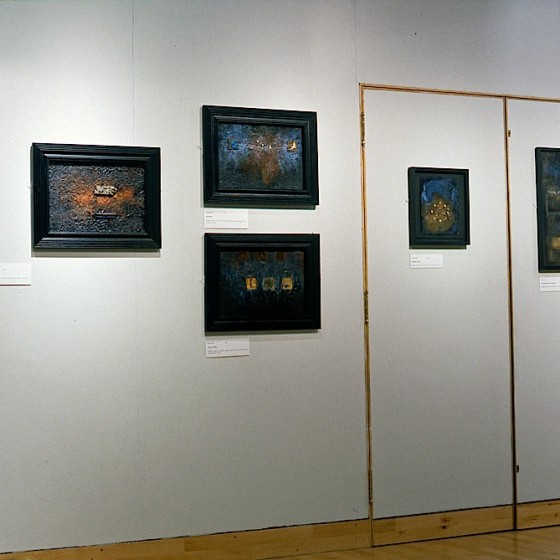 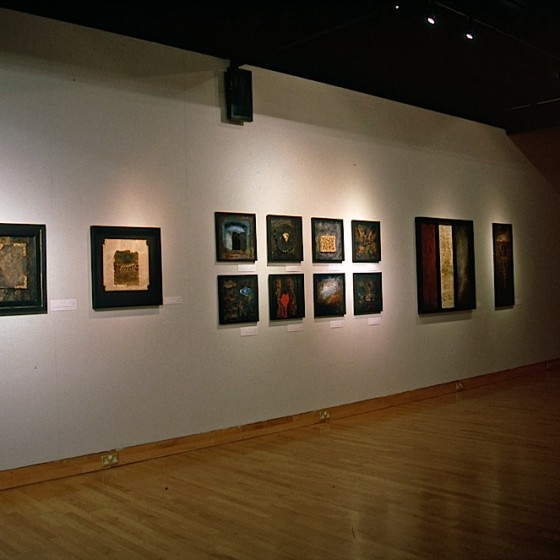 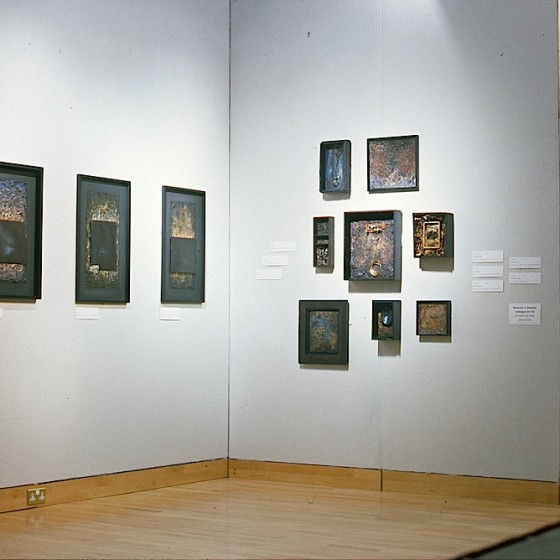 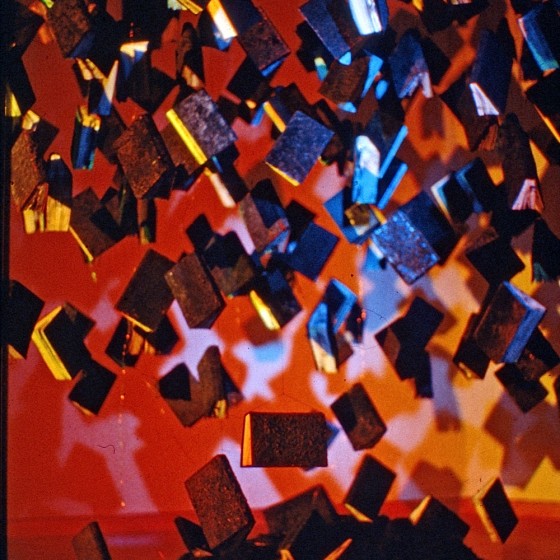 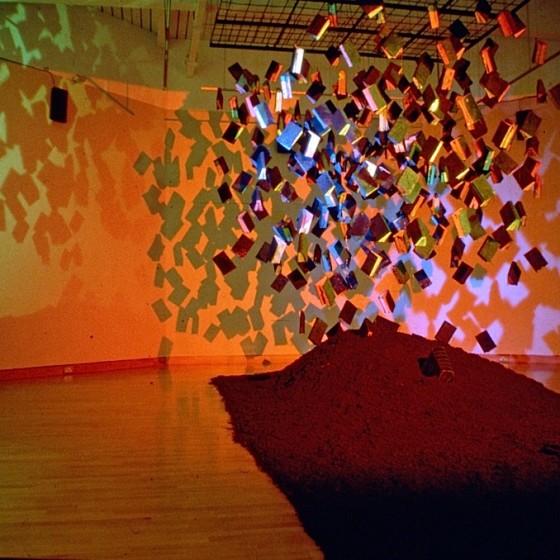 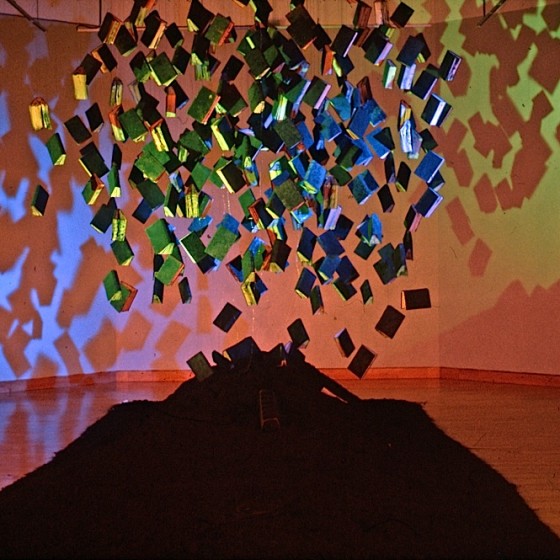 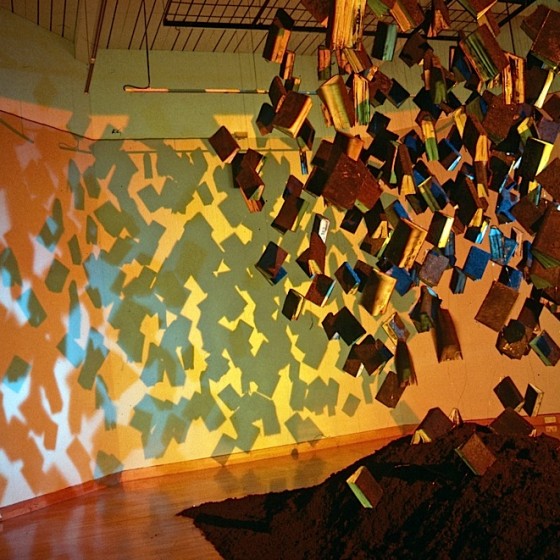 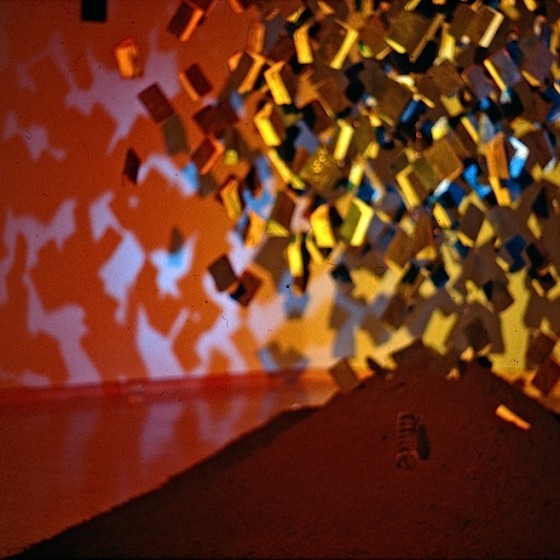 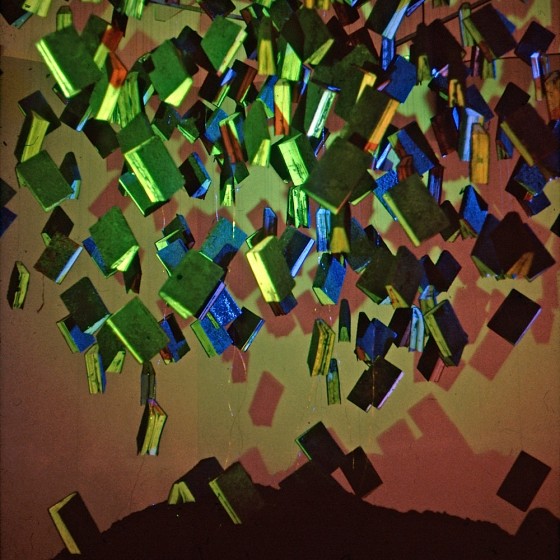 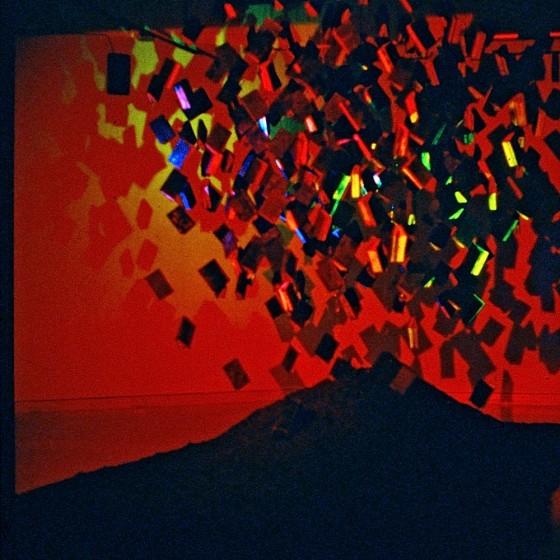 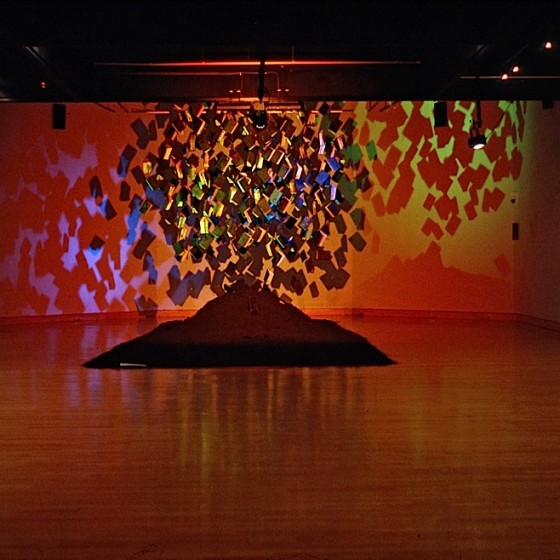 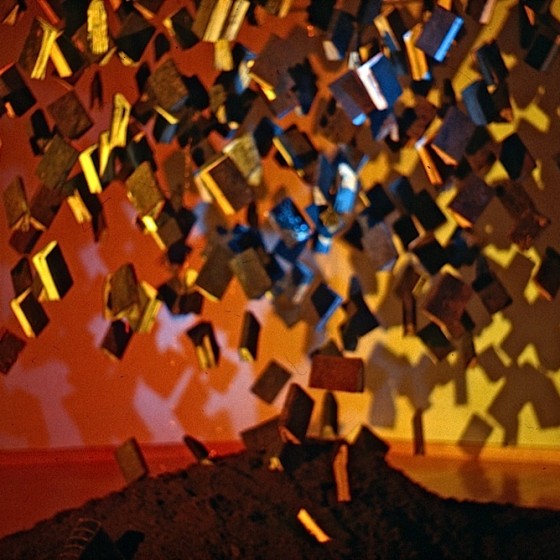 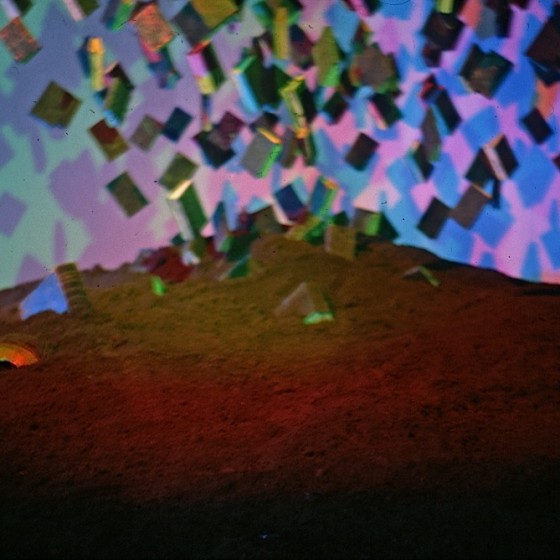 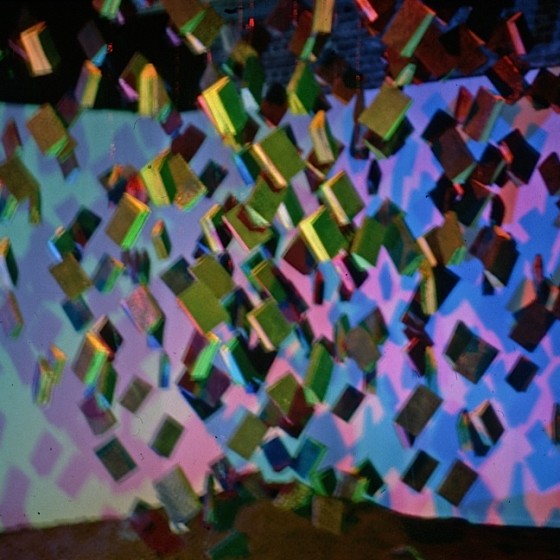 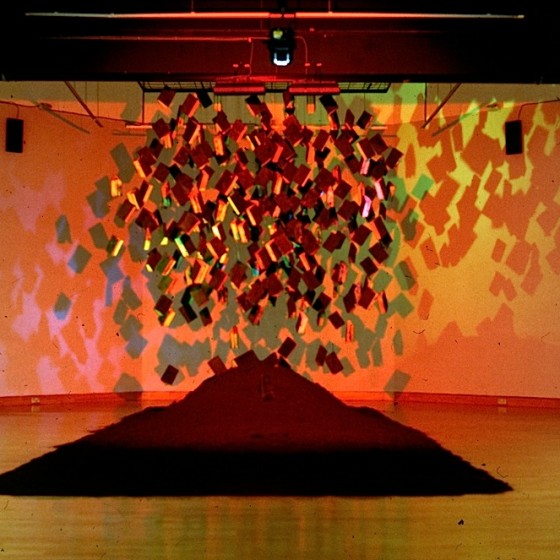 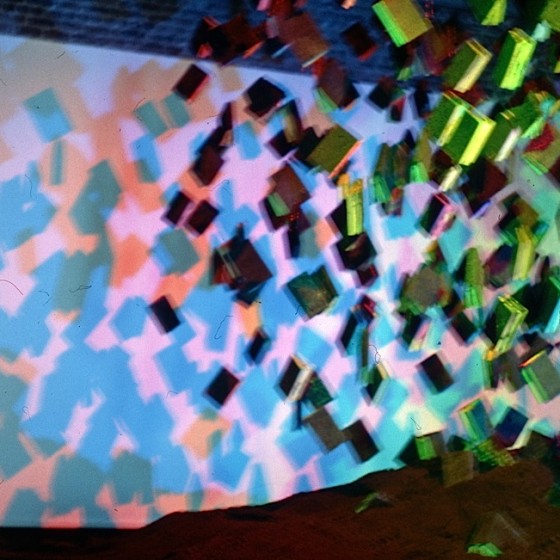 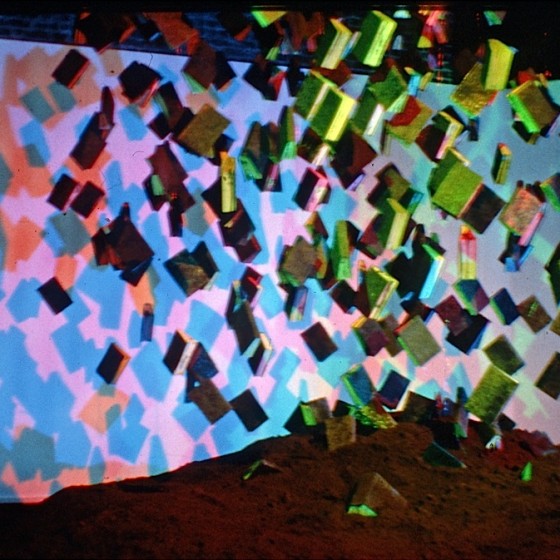 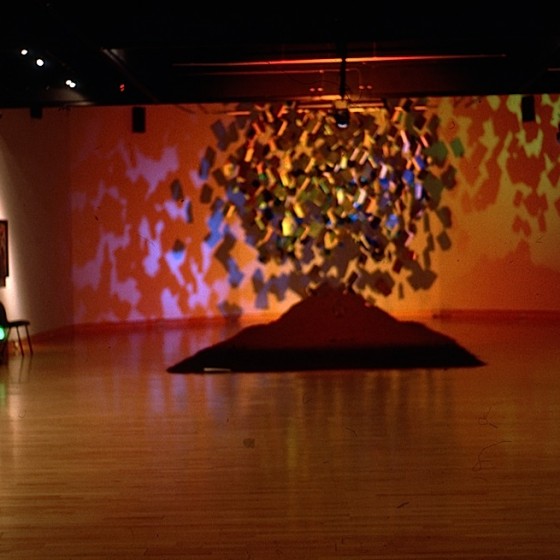 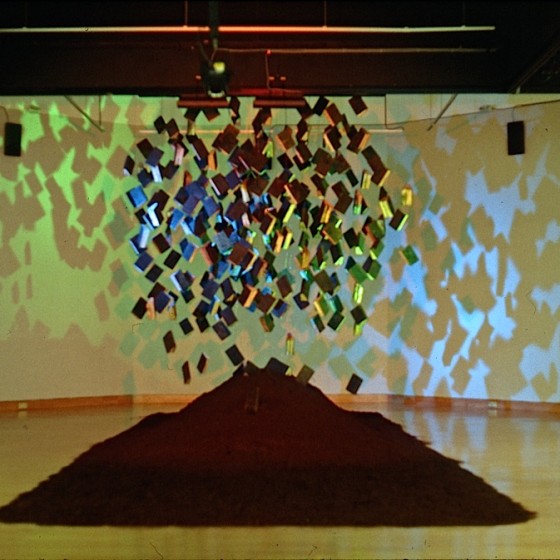 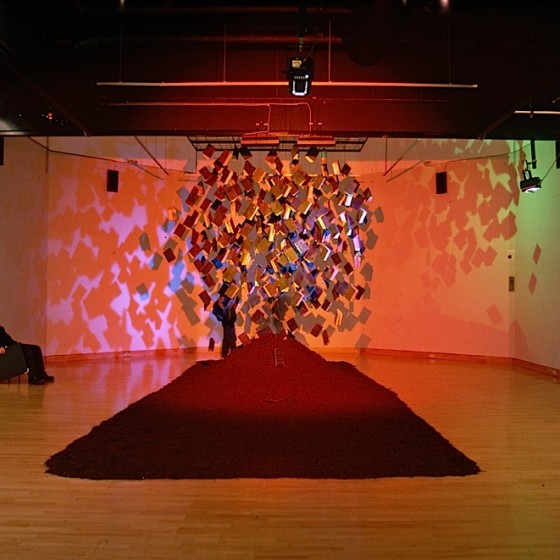 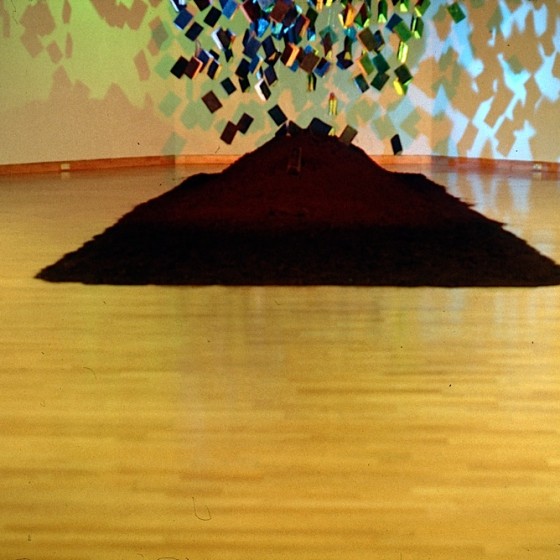 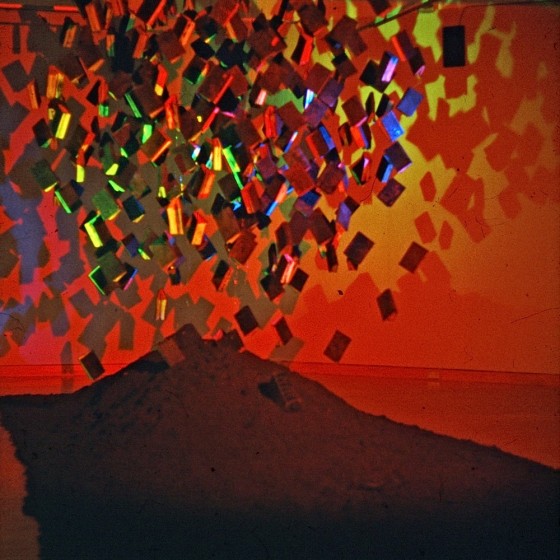 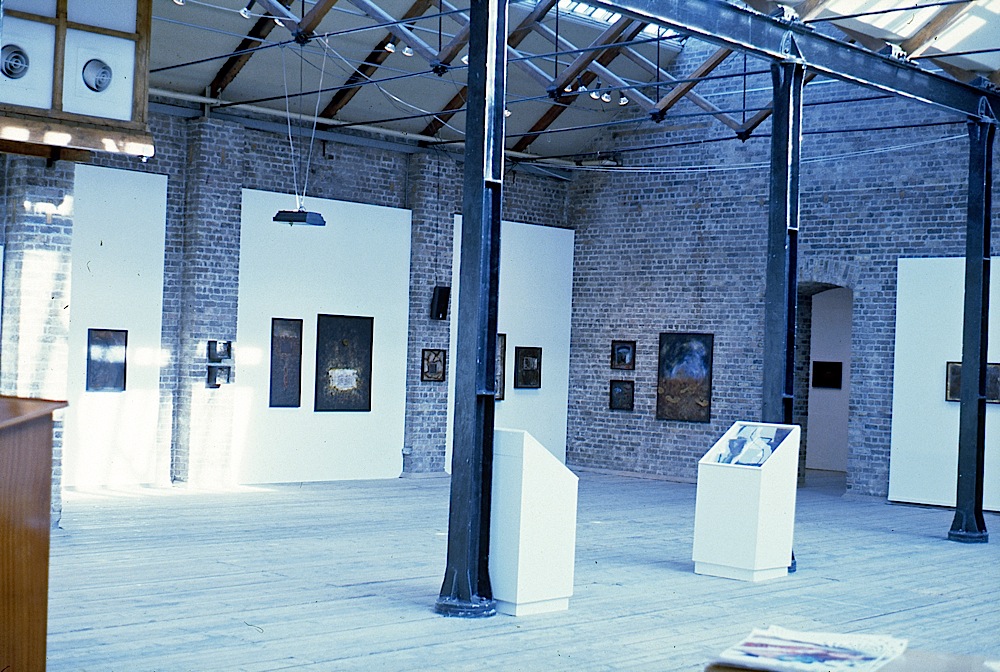 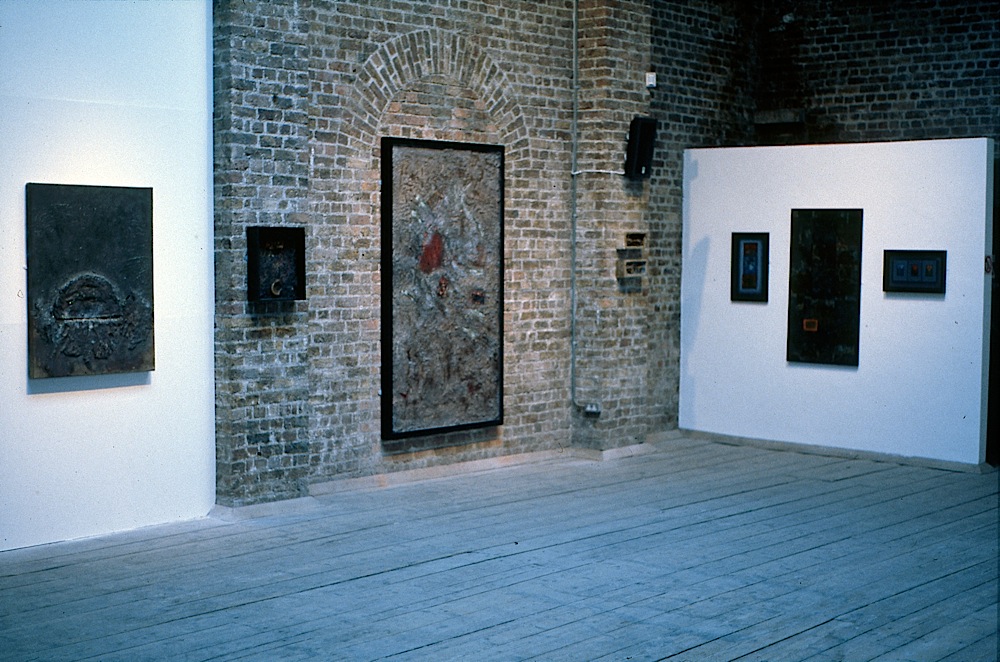 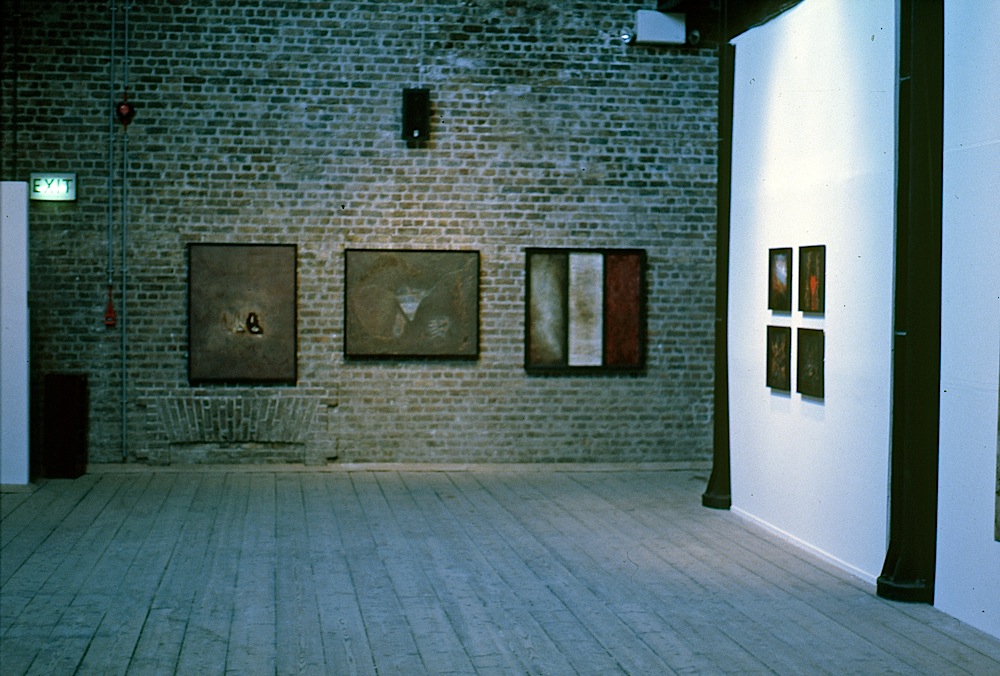 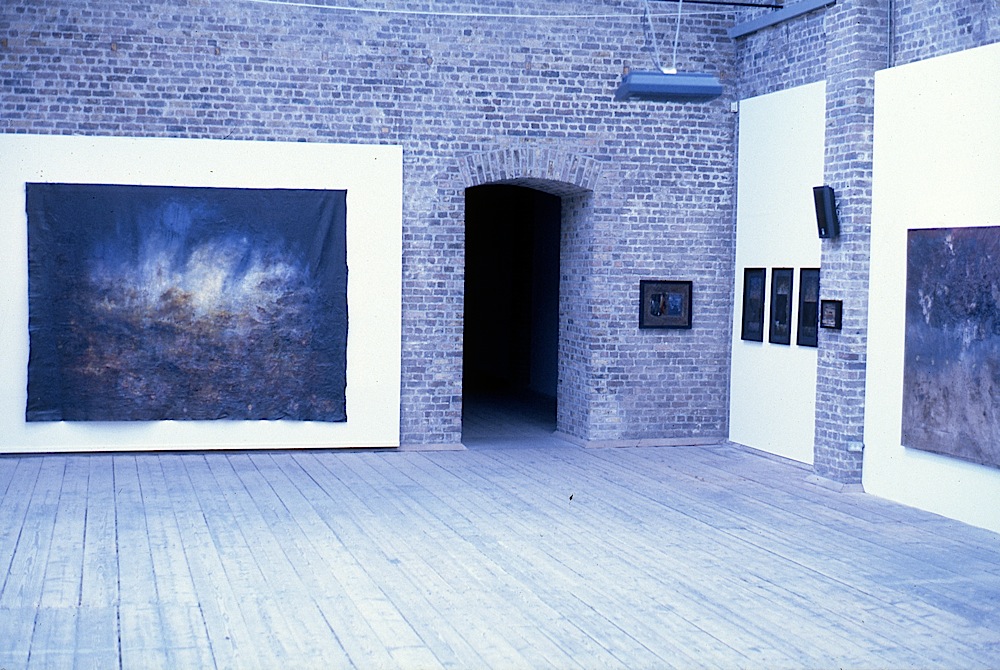 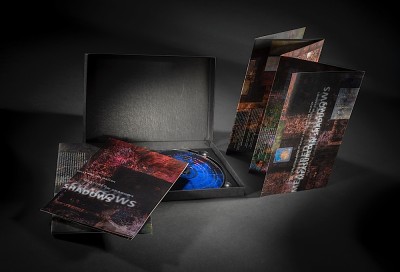 We still live with these ‘laws’. It is through a desire for the marriage of scientific knowledge and the wisdom imbued in the natural world that Measured In Shadows takes its inspiration and meaning.
We have a need for the continuing questioning of (apparently) scientific certainties, which have produced dilemmas in ethical, economic, ecological, social and political allegiances: the seepage of unseen chemical pollutants into our lands; the synthesis of super-genes; BSE; artificially created multiple births, ad infinitum. The message underlying Mills’ and Walton’s rich and sumptuous works is, “Don’t tamper with nature, work with it and not against it.”
Their continuing celebration of the phenomena at work in the ceaseless flux of nature together with their embracing of mixed-media work places them amongst the guardians of the 20th century traditions of modern art, culture and its radical intentions.
Terry Bennett, Visual Art Officer, Tullie House, from the foreword to the catalogue Measured in Shadows, 1996.

The Moment of Movement (The Morphology of the Amorphous)

I hesitate to start – I have become self-conscious, but then I suppose this is really the starting point. I offer some observations: … that the Inuit of Greenland have at least six different words for ‘snow’… that in Mexico for seven days skies are black as the Monarch butterfly arrives from Canada to mate and die before its offspring start the long journey back again – and back again … that Aboriginal song-lines hold land, spirit and man in an endlessly delicate, mutually dependent relationship… that a ram’s horn mirrors the mathematical precepts of the Fibonacci series… that the Greeks measured perfection in the darkness of shadows… The artist who perceives his art as conveying an idea of truth works from a position of paradox: for such art, if one is to understand it as a transforming of one material into another to bring ‘truth’ into being, is actually formed out of artifice. It is made with the implicit recognition of imitation or imperfection, it is made in one sense as the Self-conscious revelation of the artist’s intervention into chaos to create order… image… object.
Measured in Shadows goes to the heart of these things both in what Russell Mills and Ian Walton have taken as their symbolic subject and in their mirroring in process of that subject. The installation is a celebration of the truth of man’s only constant, the natural world and its immutable cycles. It is also an affirmation of the conception of art (in Cassier’s sense) as a symbolic language by which our understanding of the world and its infinite variety can be coherently expressed and communicated.
Central to the installation and in each of the individual works is the parallel between a belief that nature ‘just is and just does’ and an artistic process of putting materials (paints, pigments, objects) into motion and flux, allowing chance and accident to become an integral part of process.
The artist becomes, in a sense, a channel and it is in this and in the belief that such action provokes a kind of regeneration that Mills and Walton take their place in the artistic continuum of figures such as Schwitters, Beuys and Kiefer. Unafraid to place the frail, the unadorned before us as objects for contemplation such art provokes a particular and poignant recognition that consciousness though painful is necessary, the fulcrum from which to feel ‘the gestures of enabling…’ Measured in Shadows is concerned with the ‘matter’ of land, not as pastoral or epic landscape, but as phenomena, instructor, sustainer, instinct, inspiration and wonder.
This work is not an expression of a nostalgic (and often inadequate) fondness for nature; it depicts the necessary but relentless indifference of the natural order whose death is inextricably bound with regeneration. Rupert Sheldrake (whose research into the development of plants discovered that the suicide of plant cells produces the hormone auxin, which in turn stimulates new growth) wrote of his awakening to the wonders of the rebirth of nature, ”I was about four or five years old. Near the house, I saw a row of willow trees with rusty wire hanging from them. I wanted to know why it was there, and asked my uncle who was nearby. He explained that this had once been a fence made with willow stakes, but the stakes had come to life and turned into trees. I was filled with awe.”**

Read more about Measured in Shadows
Science has become in a sense, the revelation of mystery in a way that art once was, exposing feats of natural adaptation and evolution, where nature works faster than man in restoring ecological balance or developing rationally impossible characteristics to survive the most hostile environments. The bacillus infernus survives without oxygen at temperatures as high as 167°, while in the massive oil spills created in the 1990-1991 Gulf War, hydro-carbon loving bacteria have absorbed the polluted sediments more efficiently than salvage experts could have imagined.

Measured in Shadows offers up such discoveries as possible truths to affirm how little in fact we comprehend about our universe (as I write this, astronomers have witnessed the birth of the first galaxies 10 billion years ago and question now whether the universe may in fact be ‘open’ rather than ‘closed’ at the point of an original cosmic explosion): even time as we have conceptualized it is called into question.
It offers these evidences however as a celebration rather than a negation where the earth itself and the transformations nature demonstrates provide an order and resonance of immeasurably greater potential than history, science or art alone can provide. It places man not centrally, but as an integral part of the natural order: isolated, trapped even, but nonetheless elevated as the one animal able to comprehend its state and bound through consciousness to respond, record, connect, to create.

…the work is affirming/seeking to enable axioms to feel (upon our pulses) – not thrust upon us. …ideas are embedded in things.”
“So I began to get an idea of bog as the memory of the landscape, or as a landscape that remembered everything that happened in it and to it…
Moreover, since memory was the faculty that supplied me the first quickening of my poetry, I had a tentative unrealized need to make a congruence between memory and bogland and, for want of a better word, our national consciousness. ±
A cloud of books rises (or is pulled back into it) an earth mound. Among ‘future fossils’ is still discernible a mainframe computer disc (its colours refracting like petrol on water). A flock of birds on a video screen changes direction as one movement. Surface traps the memory of process in images of such painterly ‘accidents’ that their nature might seem to be their subject. A murmuring of voices in an ancient dialect, half understood, half forgotten. An image made in shadows, moving.
The attempt to depict chaos, flux and transfiguration in an installation of this scale is a bold one. Measured in Shadows resists any fixed linear interpretation, most directly in that the random sequencing of lights and looped soundtrack will never repeat identically. The viewer’s experience of the work will be different dependent on where s/he is and what events happen to be coinciding at that particular moment in time.
The installation in this sense is layered in the same way that the individual works are, the artists setting up the potential to contemplate apparently random moments dependent on fixed time, as a means by which to glimpse time flowing forwards and backwards. The objects; the books, the paintings, the excavated artifacts take on a particular significance, acting at once as triggers or indicators of specific memory and as evidence of the immutable flow. ‘Little forevers’ (as Mills calls them) where spatial and temporal time are fused, where the past co-exists with the present, imagination with reality.
Ian Walton and Russell Mills moved from London to Cumbria respectively in 1988 and 1992. Their association both as friends and sometime artistic collaborators goes back over 25 years when they first met at Canterbury College of Art and though their professional paths have been different what has remained surprisingly and discernibly consistent is a shared vision of the place of art to provoke and reveal a consciousness that comes from examining these nebulous areas of change, these edges of shadows where man’s intellectual knowledge coincides with natural wisdom.

As a whole the installation echoes the Wordsworthian imperative that art should disclose in the workings of the universe analogues for the workings of the human mind and soul. More specifically in the individual paintings Mills and Walton mirror natural processes allowing materials (paint, pigments, dust, earth, etc.) to be true to their natures, deploying a series of painterly accidents; staining, evaporating, collaging, excavating, veiling, which both describe and embody their subject.
These works are almost always made over a long period of time and they require time and quiet contemplation for their multi-layered meanings fully to resonate. The installation derives its name from the evidence that classical Greek architecture originated in the sun, that the architects knew how to measure geometrically by raising a column and tracing an initial north-south axis marked by the shortest shadow cast by the sun’s zenith. It is this meeting of the rational and the natural, the known and the instinctive which permeates and is given voice in the work.
… it is a flow, which has form, a form which flows… This form is delineation. It is not fixed (nothing in nature is fixed), it is fluid still and ready for transformation, which is inevitable movement to a new form… The fluid is given new form; the static is sensed to be fluid, at the still point of the turning world, neither arrest nor development. Form in stone, cloud, poem, in man.~
It seems that man in an atavistic search to understand the nature of what he is moves inextricably from relationship with the very forces that shape his being. We accept ourselves as rational, cognitive animal, gaining insights from scientific truths and succour from un-earthed evidences that past civilisations, like ourselves, shaped the world to reflect man’s image of himself. We have hunted, cultivated, navigated and mapped every landscape, which might support human life. We have formed language systems, arranged sound in recognisable form, manipulated the atom, recorded in infinite minutiae our socio-historical pasts. In our longing to assuage a sense of powerlessness at the relentless and undeniable truth of the continuum we arrive at what end? Perhaps only to discover from all our searchings the actuality of mystery, the certainty that nothing is certain.
© Emma Hill, Director of the Eagle Gallery London, Measured in Shadows catalogue, 1996.
…
The pockets of our great coats full of barley –  No kitchens on the run, no striking camp –  We moved quick and sudden in our own country.  The priest lay behind ditches with the trump.  A people, hardly marching – on the hike –  We found new tactics happening each day:  We’d cut through reins and rider with the pike  and stampede cattle into infantry, Then retreat through hedges where cavalry must be thrown. Until on Vinegar Hill, the fatal conclave.  Terraced thousands died, shaking scythes at cannon.  The hillside blushed, soaked in our broken wave. They buried us without shroud or coffin  And in August the barley grew up out of the grave. ^